The Bombing of Gulf Air Flight 771

Gulf Air Flight 771 was a regularly scheduled flight from Karachi, Pakistan to Abu Dhabi, United Arab Emirates. On 23 September 1983, while the Boeing 737-2P6 was on approach to Abu Dhabi International Airport, the airplane "suddenly lowered its altitude" abruptly and crashed 30 miles north-east of the airport, near Mina Jebel Ali in the emirate of Abu Dhabi. All 110 people on board, including 5 crew members, died.
In the aftermath of the incident, an anonymous Gulf Air official stated that "the airliner crashed due to an accident in midair" and declined to elaborate. Karachi's airport control tower was said to have received a distress call from the ill-fated plane, minutes prior to its crash. [1]

An investigation was carried out by the American National Transportation Safety Board, and they released a 400-page report on their findings, which was not immediately published in the Gulf. The report was revealed in September 1987 by British politician Sir Dudley Smith, under pressure from the parents of British stewardess Lyn Farthing who perished in the crash. Others among the crew on board included British stewardess Sally Anne of Peterborough and Bahraini steward Hashim Sayed Abdullah.

The report included last moments in the cockpit, including a description of Omani captain Saoud Al Kindy praying as the plane nose-dived into the desert. Also on the flight deck was Bahraini co-pilot was Khazal Al Qadi. The report mentioned that everything on board the flight was perfectly normal and voice transcripts showed the crew chatting among themselves. One asked the other if he was on duty the next day, to which he replied "No, I've got a day off tomorrow". That was followed by a sudden interruption and the recording showed the pilots making a frantic attempt to control the plane.

The report indicated a bomb in the baggage hold as the primary cause of the accident, due to the following factors:
Who bombed Gulf Air Flight 771?

105 passengers and 5 crew members were on the airplane. All 110 died. 96 Pakistanis (most of whom were returning from spending Eid holidays in their native Pakistan), 7 Britons, One American and one Iranian. 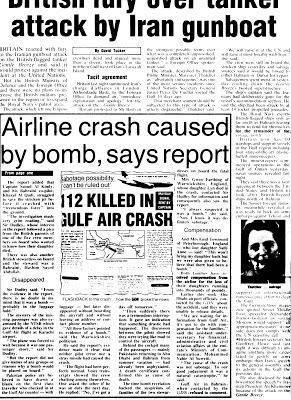