Bahrain's History through a Digital Lens

Lets face it, with Google News archive program (and more recently, with the launch of the British Newspaper Archive), the past is now being even more immortalized. Cyber space is the new dimension, it seems.

But a focus of this article I'd like to bring up is digitalizing Bahrain's modern history. Thanks to Google News archives, we can now see articles over 40 (and sometimes 70!) years old, about Bahrain's progressing history. I take an emphasis on Bahrain because it is my home country (But be sure to play around with it, with your own name!).

In this article, we shall look back at some of Bahrain's history in the 20th century. Some forgotten and some immortalized.

1. 542 Escape From Blazing Ship off Bahrain 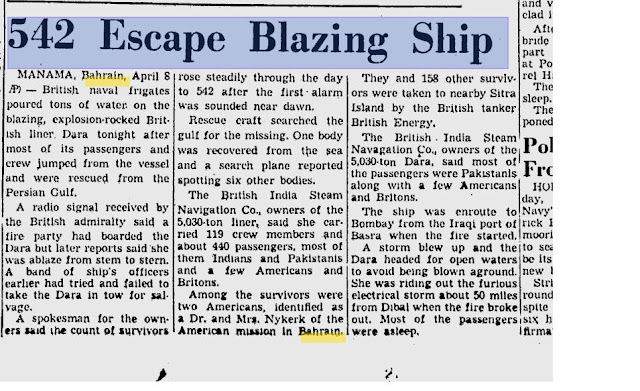 April 8th 1961 - A British Passenger liner caught fire (an explosion was thought to have caused it) and British naval frigates were deployed to the scene. 542 people were rescued including 119 crew, and 440 passengers, most of them Indians, Pakistanis and some Britons and Americans.

The ship was en route to Bombay (now Mumbai) from the Iraqi port of Basra.

2. 28 Dead on US Frigate hit by Iraqi missile 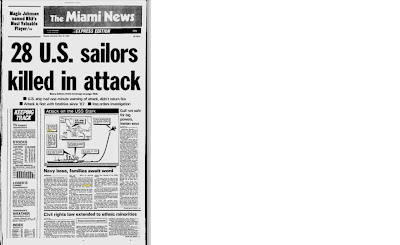 Perhaps a day of infamy for Americans all over again. In May 17, 1987, the USS Stark (FFG-31) was struck by two Exocet missiles fired from an Iraqi Mirage F1 fighter plane.

This was the first time since the 60s,, where a US naval ship was successfully targeted and fatalities occurred. This happened a few kilometres off Bahrain's coast.

What was strange was that the frigate did not respond or fire back to the attack. This has been the centre of an ongoing controversy. Still, even nowadays, what happened to the ship is disputed. But whatever happened, it left 37 sailors dead and 21 injured.

If you'd like to know more, the Wikipedia page provides good information.


Would you believe it! A hijacking and the landing spot ? Bahrain! 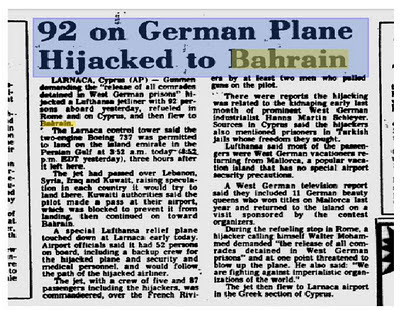 On October 14th, 1977: Gunmen, demanding the "release of all comrades in West German prisons" , hijacked a Lufthansa airliner with 92 passengers on it.

The plane, Lufthansa Flight 181, having refueled in Rome and Cyprus was now to venture to Bahrain. The hijacking was believed to be related to the kidnapping of the prominent West German industrialist, Hanns Martin Schleyer.


Lufthansa had said that the plane was filled with mostly West Germans returning from vacation in Mallorca. 11 Beauty queens are also believed to have been on board.

The plane would later travel to Dubai and onwards to Mogadishu where the plane's captain is killed. German special forces soon storm the plane at the airport. 3 Terrorists were killed, the hostages were secured. In retaliation, Hanns Martin was executed. 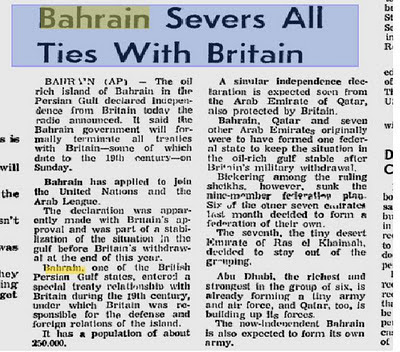 August 14, 1971 - A new country was born! The nation of Bahrain, with a population of 200,000 people, joined the ranks of the United Nations and the Arab League soon after.

After having trade ties and treaties with the United Kingdom of Great Britain and Northern Ireland since the 19th century, Bahrain cut all ties with the British*

*(It was a rite of passage to cut all agreements made before independence, with the colonial power).

Bahrain decided to go it alone and not join the federation of the Trucial States (Present day United Arab Emirates), and "wanted to form a close relationship" with the much richer and influential state of Kuwait.

Who were the Hittites?

Just over a hundred years ago, the name 'Hittite' was almost unknown, apart from one or two references in the Bible. Then, in 1880, an Englishman named Sayce said that a number of rock carvings in modern Turkey ( in central Turkey, to be precise), resembled remains of a long forgotten empire - that of the Hittites

. He was proved to be correct when, in 1906, a large number of clay tablets were unearthed at a place called Boghazkoy (in central Turkey).

The tablets were mostly in the wedge-shaped signs of Mesopotamia and some could be read without too much difficulty. Others, although looking like straightforward cuneiform, turned out to be in an unknown language.

The decipherers were helped when some stone pillars with messages carved on them were found at Kaaratepe. There were two languages; Hittite and Phoenician, the latter is already known.

The columns were to the Hittites what the Rosetta stone was to the Egyptians, it gave the decoders new symbols and their meanings. Some suspect that the Hittite language might have belonged to the same group of languages as the ancestors of most modern European ones (including English!). Now, scholars could make out "WADAR" and "EZZATENI" translate into "WATER" and "EAT".

They also found out that the place where the first tablets were found was in fact called Hattusas at about 1600 B.C. and was the capital of the ancient empire of the Hittites.

Hattusas had a fortified citadel and massive surrounding walls over two miles long. The Hitties claimed that it was one of the cities taken by their legendary kings, Pithanas , and his son, Anittas. A few other conquered towns can be identified - enough to show that at its greatest extent, the whole of Anatolia, Suria, Turkey, much of present day Palestine, Cyprus and northern Iraq were under Hittite control.

One Hittite king made a surprise attack down the Euphrates in 1595 B.C. and captured Babylon.

Another, Suppiluliumash, was such a great conqueror that the widow of Tutankhamen (the legendary King Tut) wrote him an official letter asking that one of his sons to marry her.

Ordinary Hittites were of medium height, thickset and with bony noses.
They wore felt boots and short belted kilts. Some were bearded and others clean shaven. They grew barley, wheat and also raised sheep & goats.

Like most ancient people at the time, they were Pagans and worshiped numerous Gods, the chief of which was called Teshup (the equivalent of Thor).

One of the secrets of Hittite military success was their use of iron for weapons. Before 1400 B.C., it was known that some red minerals would reduce to metal at temperature not much about those for producing molten copper from blue and green ores. But iron will only flow like copper or lead in much hotter fires, a process which was not to be invented for another 3,000 years.

The Hittite method was repeated beatings and hammerings to drive out the rock impurities. If you were very lucky, and had a little carbon in your iron ore, you'd make a great sword with it. The knowledge of how to do this wasn't available to the rest of the world until the collapse of the empire in about 1200 B.C.

Just before this happened, Muwatallis, the Hittite king, claimed a great battle victory against the Egyptians in the battle of Kadesh (which was the first ever recorded battle in history, in terms of details of soldiers and formation).

Rameses II, the Egyptian Pharaoh, also claimed to have won the battle, as his numerous monuments bear witness to.

The battle was probably a draw. It was the last great engagement of the Hittite army with its light, spokewheeled and horse-drawn chariots.

Great movements of peoples in the Middle East only a lifetime later, led to the disappearance of the Hittite empire.

Some of the old provincial city states survived for a few more centuries, for example Carchemish, Malatya and Karatepe. It was probably one of these shadowy 'Neo-Hittite' kingdoms that were referred in the Bible.

500 years after the destruction of the capital, Hatussas, the last traces of the Hittites disappeared from the pages of history. Lost for more than a millennium.
By Mohamed Toorani at November 09, 2011