Does History Repeat Itself?

First of all, let's get the fine print out of the way; every moment in time itself is unique and forever lost. You never obtain the exact same conditions (unless you happen to own a rather expensive real life Sim game). So technically history cannot literally repeat itself, unless you're a fervent believe in radical physics theories.

And now to the actual discussion. Does history in fact repeat itself? There are common themes throughout the history of human civilisations. Let's take the example of religion. All cultures, from the huts of the Mongolian steppes to the rainforests of Central America have a religion of sorts; Animism, Shamanism, Christianity, Islam and so on. The absence of a so-called 'Atheist civilisation' may be a simple coincidence. It could be a by-product of human curiosity; What is the warm life-giving Sun? Why does the Sun set and so on... It has to be a superior being (which is probably why religions from Germanic paganism to Roman mythology feature it so prominently). But I'll leave you to ponder on that.

But I digress with all this philosophy. Time for actual history. You'd be forgiven if you looked at certain events in the past and thought "huh, this is familiar? Didn't this happen before?", especially as the current media scramble over the Iran deal in the US Congress. Advocating for the invasion of a country which is allegedly constructing a nuclear stockpile without sufficient evidence (and whose aftermath would trigger a power vacuum that would cause the region to spiral into a chaotic darkness of perpetuity) sounds incredibly familiar, you may be thinking. 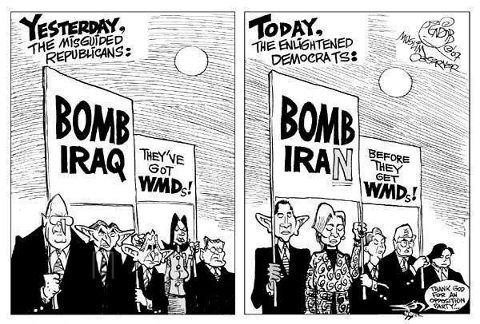 History has a habit of striking similarities. Invasions of Russia in the winter (or ever) have never succeeded (see Napoleon's invasion in 1812 and Hitler's invasion in 1941)  unless you discount the Mongols who wisely invaded from the other side. The same could be said to Afghanistan, earning the title of Graveyard of Empires due to the exceptional difficulty of pacifying the region throughout history (Alexander the Great, the Mughal Khans, the British, the Soviets and currently, the American coalition).

A nation under financial turmoil breeds the rise of radical xenophobic nationalists of the far right; the rise of Hitler & the Nazi Party in a 1930s depression-hit Germany is the most noted of examples. Not too long ago in 2012 did the Greek far right party Golden Dawn win 21 seats (its first ever representation in Greek parliament). The good news is that in subsequent elections, that figure is now down to 17 and with even more elections around the corner, we can be hopeful that number slides down.

Allow me to bring the 5th century Byzantine historian Zosimus into the framework. Zosimus highlighted that great empires fell due to internal conflicts and disunity. Citing the fallen empires of the Greeks and Alexander's Macedon, he brought attention to the need for an external enemy. The rapid growth of the Roman Republic in 53 years, he credited, was due to the devastating Punic Wars fought against Rome's bitter rival, Carthage. Roman themes were embraced and thus championed in the the face of Carthaginian foes. The defeat of Carthage (and the Gauls) set the scene for internal quarrels and civil war, culminating in the replacement of Roman aristocracy with monarchy, which eventually decayed into tyranny.

The eventual fall of all empires was a notion brought up earlier by Dionysius of Halicarnassus who had anticipated Rome's eventual collapse after the defeat of her rivals  (Assyria, Macedonia, Persia). The iconic Italian historian Machiavelli commented on the recurrent themes between "order" and "disorder" within contemporary Italian states between 1434-1494:


..when states have arrived at their greatest perfection, they soon begin to decline. In the same manner, having been reduced by disorder and sunk to their utmost state of depression, unable to descend lower, they, of necessity, reascend, and thus from good they gradually decline to evil and from evil mount up to good.


Machiavelli accounts for this oscillation by arguing that virtù (valor and political effectiveness) produces peace, peace brings idleness (ozio), idleness disorder, and disorder rovina (ruin). In turn, from rovina springs order, from order virtù, and from this, glory and good fortune.

This post can go on forever. To paraphrase Mark Twain; history does not repeat itself. Not exactly, anyways. But it does rhyme. I'll conclude by sharing one of my favourite cartoons on the topic. Let me know what you think in the comment section below! 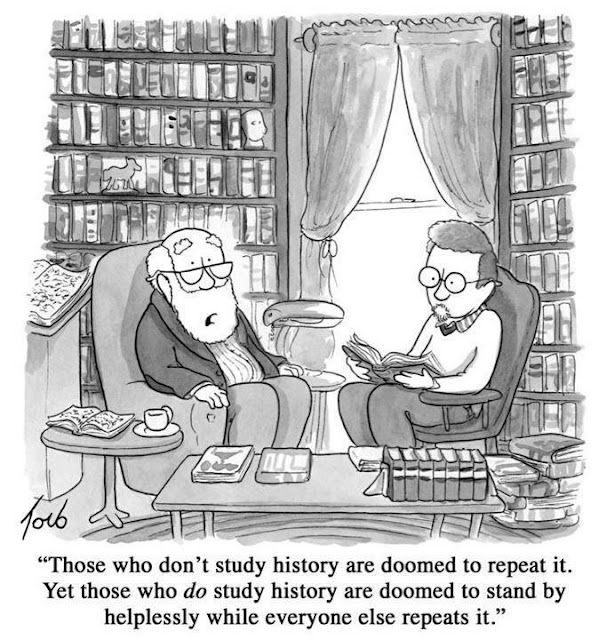