Yup, thats right folks , we've managed to survive the financial crunch, Y2K, Swine flu and Nuclear apocalypse to be here today. One day separates us from the year 2011. I'm wondering why I even care about it, its just a new year for God's sake ! But, you might as well just go with the flow. I've noticed that a lot of people, (my fellow bloggers included) have developed a list of their fondest moments in 2010 (same thing with the newspapers, sadly that isn't available in mine this year :( . Alright - Back to the story :

Number 10 on my list - The Icelandic Volcano Eruption, Don't ask me to spell it  I CAN BARELY pronounce the first 4 letters !! I liked that event because it showed how a little tiny itsy bitsy act of God (even in the form of a volcanic eruption) can practically shut us down (LITERALLY , I mean all the airports were down and out :) ).

Number 9 on my list - Swine Flu , don't get the idea that I supported Swine Flu. I'm just stating how it had affected my area of life (by giving me a month holiday :P ) but stealing another 2 months away from me >.>
Number 8 on my list - The FIFA World cup 2010 , who could forget that ? Quite an annoyance = Damn you Vevuzuela !! Spain pulled up the upset win as being the first World Cup champions to be beaten in the first round by the people who've invented Swiss Cheese.
Number 7 on my list - Harry Potter, yesh I was looking forward to the movie all year. Considering I already read the book, it was boring =.= . Lucky for me, David Yates knows how to direct a movie :D
Number 6 on my list - How to Train My Dragon - Most EPIC Cartoonish Comedical Movie Ever ! (First to Shrek :)
Number 5 - The 33 Chilean Miners being rescued- As being a person who listened to the rescue LIVE on BBC World Service, it was a nice sigh of relief to me and the world. FINALLY , some good news :)
Number 4 on my list - The Wikileaks Guy , Julian Assange - Most talked about person in the world , wanted by all , stuck in a prison cell in London .

Number 3 on my list - A truly sad moment was the Oil Leak from that damned Oil rig in the Gulf of Mexico, not only did it lead to millions in damage but also lead to the death of countless number of plantlife and animals.
Number 2 - My brother's graduation , truly a proud moment :)

Number 1 - The release of World of Warcraft : CATACLYSM - EPIC expansion pack :) Yes I know, I'm addicted to this game. But its too good :(

HAPPY NEW YEAR EVERYBODY
By Mohamed Toorani at December 30, 2010

I know I haven't been posting in a while ( apologies for that) but I feel it would be very unkind of me to not wish you all a happy christmas. 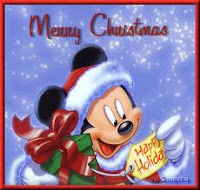 So Merry Christmas and a Happy New Year- Yesh, we'll be starting the "Tween" years (Dunno what that is but lets ignore that) hopefully, it would be less gruesome than the last decade.

Back to the chase = Merry or Happy Christmas :D
By Mohamed Toorani at December 25, 2010