"Your Spitfires At Work!" British Propaganda Poster in the Persian Gulf

The nature of propaganda is intertwined with that of human nature. Propaganda served as a way to solidify public support, decimate the reputation of the enemy, further one's ego and reputation (indeed, one of the earliest pieces of propaganda are those detailing the rise of Darius of Persia). In times of war, the home front is as crucial as the battlefront and propaganda is always an effective tool in a government's arsenal. In this post, I'm sharing this poster made by the British (likely the British Civilian Organisation) destined towards the British protectorates of the Persian Gulf whom had donated funds to the war cause (indeed, the hakim of Bahrain donated £30,000)

The title reads "Your [Persian Gulf] Spitfires in Action". Official transcript of the poster lies below:

[top left] One of the four fighter aircraft donated by the people of the Persian Gulf. The other three aircraft are called 'Bahrain', 'Kuwait' and 'Oman'.

[bottom right] Your fighter aircraft protect the Allies’ commercial ships against the attack of enemy aircraft. Good surveillance and vigilance of the fighter aircraft only played a major role in the arrival of many military shipments into their destination ports.

[bottom text] Countries of the Persian Gulf voluntarily participated in the daily punishment administered by the RAF to the aggressive Nazi State. 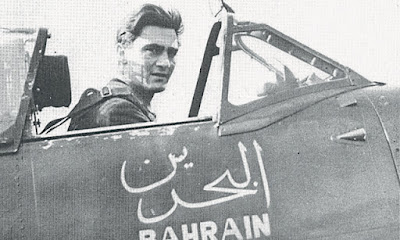 This photograph shows the spitfire (entitled Bahrain) that was donated to the Royal Air Force after raising £15,000 to buy it. The plane itself was piloted by Air Vice-Marshal (Flying Officer during the Battle of Britain) Francis David Stephen Scott-Malden.

His entry at ‘The Airmen’s Stories’ section of the Battle of Britain London Monument website reads:


‘Bearing the initials "S-M" below the cockpit and the legend "Bahrain", Scott-Malden's Spitfire W3632 - built at the Supermarine factory at Woolston, Hampshire - was a gift from the people of Bahrain, who had raised £15,000 to buy it.’

In his Bahrain plane, Scott-Malden led one of the Free Norwegian fighter squadrons leading three sorties in one day during the disastrous Deippe raid of August 1942. Scott-Malden was later awarded the Distinguished Service Order and decorated by the King of Norway.

If you are interested, you can read about the role of Bahrain during the Second World War
By Drood at July 17, 2015