Eradicating Illiteracy in Bahrain - A Short History of Education

The United Nation defines illiteracy as the inability to read or write. It is estimated that more than 780 million adults are illiterate (17% of the world's population) two-thirds of whom are women. Additionally, an estimated 122 million youths (60% of whom are women) can neither read or write. In response, UNESCO launched (amongst other numerous programs) the Education For All program in 1990, which is a global education movement with the aim of meeting "the learning needs of all children, youth and adults by 2015".

In this article, we will examine the historical significance of illiteracy in Bahrain and the campaigns that tackled it.

In the first half of the 20th century, a majority of the population was illiterate. The 1971 census showed 52.9% of Bahrainis were illiterate. Following a series of campaigns, the 1981 census showed that 31.3% of the Bahraini population (238,000) could neither read nor write. One-sixth of foreigners (20,000 of 112,000) were illiterate (this was believed to be due to the influx of labourers). According to the census, the greatest percentage of illiteracy was seen in the 40-65 age range (in excess of 60%). In all age groups, more women will illiterate than their male counterparts.
Despite 25% of the population being enrolled in public schools (Qur'an schools were the only other education institutions prior to them), the growth of illiteracy continued. This could be partially explained by the fact that, until 1972, all public schools were located in urban towns and cities, and none in the rural villages. State education was also free but was not compulsory at the time. Additionally, the prevailing cultural perception towards women education appears to have discouraged school-age girls from entering the educational system. The vast majority of these girls came from low-income families, and according to Shirawi 1987, reasons cited by parents included the fact that "girls learn all they need from their mothers", "girls needing more protection from boys and thus being kept home", "girls may learn new ideas that their parents may disapprove of" and that "it is expensive to send [all] children to school so it is better to just send boys".

As a result of such perceptions, an inequality evolved. In the 1981 census for example, just 3% of Bahraini males aged 10-19 were illiterate compared to 13% of girls in the same age group. Age was also a factor; the older a person was, the greater the likelihood of illiteracy. The same census showed that 82.7% of Bahraini nationals aged 50 and above were illiterate. Interestingly, the census showed that Bahrainis living in urban areas were more likely to be illiterate compared to their rural counterparts. This is believed to be due to the fact that the overwhelming majority of Bahrainis (80.4%) live in urban areas.


The earliest recorded instance of an anti-illiteracy campaign was in 1940, when members of an unnamed influential national club opened several evening classes in Manama for the illiterate, particularly targeting the elderly. What is noteworthy about this attempt is that it was entirely driven by the people (and not by governmental bodies) and was brought about by foreign-educated Bahraini students.

In 1948, a group of Bahraini students from the American University of Beirut (in their summer holidays, no doubt) provided free Arabic and basic arithmetic classes in Muharraq, an estimated 700 elderly Bahrainis were said to have attended. Further such attempts by national clubs and collaborations by the Education Ministry continued in 1952 and again in 1960. However, all these campaigns were exclusively for men.

The first campaign that tackled female illiteracy was in 1960 when members of the 'Nadhat-al-Fatat' group voluntarily opened classes offering lessons in basic reading and writing to women, especially the elderly. However, it is worth noting that all these campaigns were individual in origin. There was no general coordination between different organisations (aside from the Ministry of Education). No such formal coordination actually existed until 1971 when elected representatives of men and women societies, under the guise of the Alumni Club, setup a committee to tackle illiteracy. With the financial backing of the Education Ministry for books and other resources, eight classes were opened for 280 women and five were opened for 125 men in the same year. Challenges faced included slow reactions from the private sector and the inaccessibility of illiterates in rural locations.

In 1973, the Education Ministry took charge of the anti-illiteracy campaign, launching more than 70 Arabic-language teaching centres and 12 English-language teaching centres across the country. This scheme was the result of a series of recommendations given by invited UNESCO experts who conducted a study in the country in 1971. The recommendations outlined a five-year plan to eradicate illiteracy by creating 100 classes per year for 5 years for male and female illiterates. The plan also made education mandatory for illiterates between 10-44 years of age.

Other measures included the establishment of a national literary committee to oversee the campaign, the establishment of educational centres in all major settlements, the training of a competent teacher population, and enlisting the aid of religious leaders and mass media, Exact details of the programme can be found in pages 328-329 of Shirawi, 1987.

The campaign was largely successful. The only drawbacks faced were the high dropout rates amongst female students. Reasons varied from domestic responsibilities, pregnancy and childbirth to a simple case of lost interest. 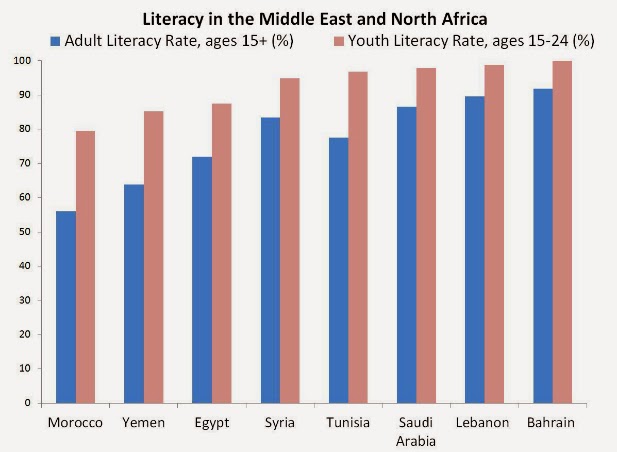 As a result of compulsory education, state-funded public education and an array of private schools, the current literacy rate of Bahrain stands at 94.6%