This is a rare composite aerial photograph showing the northern portion of Bahrain , predominantly Manama (L) and Muharraq island (R). Dated from 27 September 1937 and written up by the British Royal Air Force (RAF), the following locations are indicated by means of identifying letters in red ink:

Drama in Manama: A Foreigner's Guide to Muharram in Bahrain (1940 Edition)

Bahrain holds a special place in the Persian Gulf for being one of the few countries to openly host processions commemorating the Islamic month of Muharram throughout the country. However, this post will not go into the history of Muharram itself and its significance to Shia Muslims in particular (though I do encourage independent research on the matter). In Bahrain, the first recorded public processions occurred in Manama in 1891, with it becoming an annual public event since. British records showed public Muharram processions also emerged in villages throughout the country in 1939.

Now the main subject of this post is the Muharram of 1939 which was during a significant time in Bahrain's history; oil was discovered in the country only 8 years before (the first in the Gulf region). With this oil and the establishment of the Bahrain Petroleum Company (BAPCO), the country saw an influx of engineers and experts in the oil & gas industry (predominantly British and Americans). For the most part, the westerners intermingled well with their Bahraini counterparts.

However in the Muharram of 1939, British records indicated that some minor altercations occurred between western employees of BAPCO and procession-goers after the foreigners laughed and photographed the processions, no injuries were reported. The following are excerpts from British records.

As a result of the massive influx of foreigners, processions during 1939 changed course of their regular procession paths and some of the foreigners followed into the side streets, causing minor altercations. In an effort to avoid the possibility of a riot in future Muharram processions, it was advised by the British political agency in Bahrain to BAPCO to restrict the number of foreigners in Manama to 100 persons during the month of Muharram.

Preparations were drawn up for the Muharram of 1940 and included a map that highlighted and identified areas for the public & those out of bounds to foreigners. Furthermore, a document was prepared on how foreigners should present themselves in Manama, should they wish to observe the processions of Manama (which many do to this present day). These plans were for the next Muharram procession, estimated to take place on 19th February, 1940.

Bonus: this page includes side commentary on Muharram by Charles Belgrave and include some inflammatory statements.

A Study of Bahrain in Old Maps

One of the many ways we can perceive and analyse the past is through depictions of contemporary geography onto maps. Cartography (the study of maps) has long helped historians understand and appreciate how peoples and empires perceived themselves in their time. And, more often than not, they were the centre of their own universes.

Historically & up to the 18th century, Bahrain referred to the eastern shores of Arabia, an area that currently encompasses Kuwait, eastern Saudi Arabia, Bahrain, Qatar, the United Arab Emirates and parts of northern Oman. The German map, made by Jacques-Nicolas Bellin, below from 1745 lays testimony to this.

Other interesting maps of Bahrain throughout the ages that I could find and appreciate are the following. All of these have been found, scanned and uploaded by the Qatar Digital Library (which is doing an incredible job at documenting and preserving primary source historical documents of the Persian Gulf)

Trigonometrical Map of the Island of Bahrain, 1828.
This splendid map was produced by James Horsburgh, Hydrographer to the East India Company in 1828. This map's title features in a decorative cartouche with a view of ‘A Mosque on Bahrein. From a rough sketch by Dr. A. Mackell’, with the mosque in question being the Khamis Mosque (the oldest mosque in the country, dating back to the 7th century AD). Other prominent locations mentioned include the ‘Portuguese lighthouse, harbour and fort’, west of Manamah.

The engraver’s details inserted below a compass rose orienting north at the right centre of the map. Nautical chart of the western coast of the Persian Gulf showing the Island of Bahrein compiled from the surveys carried out by the Bombay Marine’s officers between 1820 and 1829.

Imperial Airways Flight Path of Bahrain, 1937.
This map was made in 1936 and edited in 1937, published by the UK Admiralty. Imperial Airways (the predecessor of British Airways) planned to introduce flying boat services to the region, including Bahrain. This map was utilised as a means of assessing the various seaborne approaches to Bahrain Harbour and Khor Kaliya [Khawr al Qulay‘ah]. The map shows Bahrain island and the surrounding sea. It includes soundings in fathoms with supplementary depth contours, and highlights features to aid the navigator. The map also outlines Manama and Muharraq and details buildings (prominent buildings being labelled).

Map of Muharraq and the New Airport, 1937
This map was drawn up in 1937 when the British Political Residency in Bahrain intended on establishing a civilian aircraft landing strip for Imperial Airways (in addition to the sea landings that were to be conducted).. This map shows Muharraq Island, and the causeway linking Muharraq to Manama. Also shown are principal roads, tracks, buildings (including the Political Agency in Manana), islands, and the location of several underwater freshwater springs. A rectangle on Muharraq Island indicates the area specified for the landing ground, which would later become the current Bahrain International Airport.

Bahrain Saudi Maritime Border, 1939
Dated 29th May 1939 and drawn up with regards to Saudi claim to certain islands, this detailed sketch map was prepared by the Bahrain Petroleum Company from Admiralty charts. It shows  Bahrain, the Saudi Arabian and Qatari coasts and the waters to the north, with shoals and reefs mapped in detail. New information obtained during a reconnaissance survey between 25th and 27th May 1939 were added in red ink including the proposed boundaries line to determine territorial waters of Saudi Arabia and Bahrain.

Artesian Water Supply in Bahrain, 1948
This is fairly straightforward. In 1948, at the request of the Government of Bahrain at the time, a map was drawn up by the Bahrain Petroleum Company showing the national distribution of artesian water wells in Bahrain. Artesian water wells are basically a well that doesn't require a pump to bring water to the surface; this occurs when there is enough positive pressure in the aquifer itself. This pressure forces the water to the surface without any sort of assistance. Famous examples of artesian wells in Bahrain include the Adhari spring, Ain Abu Zaydan, Ain Um Sujur, Ain Barbar. However, due to overutilisation of the aquifer and rapid urbanisation, many of these springs have ceased running since the 1980s. This paper by Mohammed Al-Ansari on Bahrain's water demand and subsequent management provides a good overview of the current situation and likely hurdles to be faced in the future.

Greetings From Bahrain! 1939
This is light hearted compared to the other ones. On the occasion of King Edward VIII's birthday in June 1939, the British political residency of Bahrain (headed by Kennard Foulkes) sent Buckingham Palace a greetings card from Bahrain. If you look past the imperialism, it's a pretty cute card. Designed by Ashraf Brothers (a well known local business), the card features important sites in Bahrain including the Shaikh's Hunting Lodge, Oil Wells, the Portuguese Fort, and Water Wells. 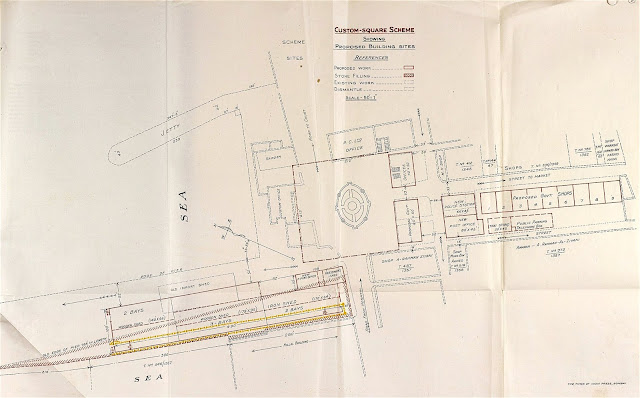